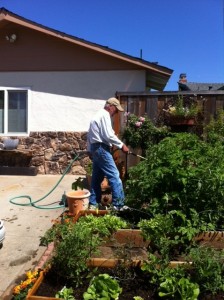 The tomatoes are in. So are green beans, eggplant, lettuce, peppers, squash, herbs, strawberries and radishes. This experiment of getting John engaged in new activities started with a few tomato plants, but it has become so much more.

In preparation, we hired someone to clear the area of our front yard that sits between our driveway and our neighbors. Everything but two rose trees were removed and hauled away. This left us with a sunny 12 by 8 foot plot. As a lifelong gardener, I was excited about the possibilities; John was worried about the amount of work involved but liked the idea of being outdoors.

We took advantage of early spring garden tours. This was a good opportunity to discuss with others the pros and cons of various planting methods. I would have visited 20 in a day, John dug in his heels after three. Hoping to pique his interest, I left vegetable gardening books on the coffee table. He thought they were pretty.

Over several dinners we discussed layout and I sketched our most promising ideas on notepaper. We decided to plant in raised beds, partly because it would be easier on his back, partly because the structure of the boxes appealed to John’s sense of order. For me it also meant that the possibility of John accidentally stepping on plants would be kept to a minimum.

I didn’t want to fuss with connecting hardware so we constructed three, 2×6 ft. boxes using redwood fencing and cedar stakes. At the store we had a couple of planks cut into two foot sections eliminating the need for any tools besides a small sledge hammer and brute strength. The bonus to this method is, if we don’t like the configuration, next year all we have to do is “pull up stakes” and move things around.

We purchased six; very large packages of soil amendments, thinking two for each box would be perfect. We had to ask for help wrestling them into the back of the car. At home we pushed, pulled and rolled them into position. Breaking open the plastic wrapping on those bundles reminded me of the time we tried to break open a coconut we found on a beach in Hawaii—frustrating is too kind a word. We had used up all our brute strength assembling the boxes. Exhausted, we resorted to swinging an axe. It was our garden party version of a piñata.

We didn’t like the idea of leaving these nice fluffy beds exposed to the neighborhood cats so we began frantically placing our plants into their permanent home. I had about 45 minutes before I needed to leave for work. I left John watering his garden.

After a couple of days we realized a lot of valuable real estate was being under-utilized, so we moved pots that weren’t working out the way we hoped and built a long 12×2 foot box along the fence line. Our final design looked like a giant capital E.

We also realized that the soil amendments we purchased were supposed to be mixed 50/50 with our garden soil. What part of “amendment” didn’t we understand? In my defense I’m going to say that I was still shaken up from the domestic violence incident we had witnessed when we first purchased our supplies. (See previous blog entry)

Resigned we “unplanted” the two boxes, then mixed in native soil and replanted our seedlings.

Eventually small weeds started popping up between the boxes and cats had begun using our pathways as way stations. After the second day of performing morning kitty clean-up, I asked John to pull the weeds and then to soak the entire garden, including between the raised beds, knowing that wet soil would be a small deterrent.

When I came home that night all of the dirt between the boxes had been dug in and turned over. Walking into the house I asked John why he did that. He said I told him to. I said I did not. Yes. No. I worked off the futility of the conversation by raking smooth the dirt and soaking it until it looked like Woodstock after days of rain. The cats haven’t been back.

I would have loved a drip system, but John needed to be engaged in the daily care of the plants. I had to teach him how to water. He thought a quick sprinkle did the trick. I would call him over to a patch he just left, plunge my trowel into the dirt near the plant and show him how dry it was. Where was the plant supposed to get moisture? This grandfather of twelve knew how to nurture so I told him, “these are your babies, take care of them.”

So now after taking the dog for a quick morning walk, John waters and pampers his plants. Although the weather has been unusually mild, we’ve harvested lettuce, snow pea pods, green beans and basil. As an added benefit neighbors are stopping by to talk with John about his garden.

I think he is actually on his way to becoming a gardener.