Wonder what it’s like to ask legislators for funding when California is bleeding red? 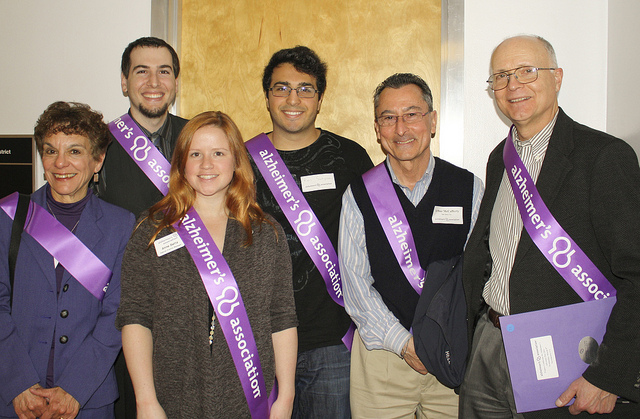 Sherrie (left) with her team of advocacy volunteers

Wonder what it’s like to be at the State Capitol in Sacramento at a time when California is bleeding red?  Well, if you are there to raise awareness and tell your elected officials that it’s time to wake up and pay attention to the Alzheimer’s disease public health crisis – as more than 100 of us did on March 9 – it’s surprisingly upbeat.  Seems odd, I know.  But there’s a reason for our optimism.

First, the Alzheimer’s State Plan was unveiled – this is the first strategic view of Alzheimer’s in 24 years – and many elected officials took to the podium in this well-attended, inspiring and informative press conference.  We thank them for their dedication to folks living with this disease.  Volunteers and professionals spoke eloquently, as well, but the core of the message was delivered by Dorelee Heisler – a woman from Eureka who is living with Alzheimer’s.  Every day she deals head-on with what it’s like to struggle with diminished cognitive abilities.  Yet, she volunteers in her community, continues to derive musical pleasure from her flute playing, surrounds herself with her loving family and friends, and serves on the California State Health and Human Services Alzheimer’s Advisory Committee.  Is this an important voice?  You bet it is.  In addition to the fact that Dorelee is a delightful human being with a tremendous sense of humor, she brings a critical perspective to those shaping policies for people with Alzheimer’s and their caregivers, and it’s a perspective only those who are themselves experiencing such challenges can bring.

Here again, you might ask:  ok, that’s nice, but what does this have to do with public policy or advocacy?  Simply this:  the creation of the Alzheimer’s Advisory Committee was made possible through legislation, resulting in a body that is written into statute.  Furthermore, the regulations were recently amended to add two “at large” members to the Committee who must be people with Alzheimer’s disease.  That’s a breakthrough and it couldn’t have happened without your advocacy.

Unveiling the State Plan was only part of the reason we were in Sacramento last week.  As usual, we made our way through the Capitol, sitting down with legislators and their staff.  Everyone is all too aware that the budget shortfall threatens many programs that have been the cornerstone of innovative and quality care for people with Alzheimer’s.  So, our message focused on garnering support to communicate the Alzheimer’s Disease State Plan, and to support taking Governor Brown’s tax extension proposal to the voters.

While the response was predictably partisan, I felt it was just as important (maybe even more so) to turn each conversation around to the broader issue of “awareness.”  Such a discussion is made much more compelling when a person on your team has Alzheimer’s and is willing to share their story.  That was the case with Arthur – a man from San Jose who spent the day with my team; in every meeting he carefully read a brief and concise, yet personal, statement.  These comments were so powerful that they prompted one experienced legislative staff to admit he had never talked before with a person who had Alzheimer’s.  Hesitantly at first, but growing more comfortable with Arthur’s honest responses, he asked question after question about what having Alzheimer’s feels like.  Despite the fact that he was not going to give us support for some of our requests, he was truly interested in the human aspects of Alzheimer’s and clearly left the meeting knowing a lot more.  I bet he went home that night and told his family only one thing about his day…..his eye-opening talk with Arthur.

So, my friends, success comes in different packages and, thanks to Arthur, we all felt that a lot was accomplished.

I’m already looking forward to Advocacy Day in 2012, and I hope you are too.  If you were in Sacramento on March 9, we’d love your impressions, whether this was your first visit or your twentieth!