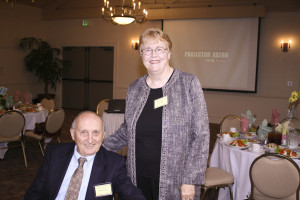 Our Alzheimer’s Association family was stunned over the holidays when our Board Member Pat Sippel of Carmel, Calif. passed away unexpectedly. Our Monterey office Director Sherry Williams tells the story of Pat coming into the office in 1995, sharing the story of caregiving for her mother with Alzheimer’s and telling Sherry she “would volunteer for a year.”

She went on to be part of the Alzheimer’s Association’s volunteer leadership in the Carmel/Monterey/Salinas area and served on our Northern California and Northern Nevada Chapter Board for the past five years. She started and led the unequaled Treasures and Pleasures fundraising event in Monterey for ten years, chaired our Reason to Hope fundraiser and the Walk to End Alzheimer’s in Monterey – as a stalwart San Francisco Giants fan, she was delighted when Giant’s skipper Bruce Bochy stepped up to support the Walk.

A third generation Carmelite, she was organically connected and invested in her community. Yet I watched over time as she reached out beyond her community and embraced the Alzheimer’s Association’s larger mission. She met volunteers from Stockton and Chico and San Jose who shared her experience and her passion to see a different future for her son and grandchildren. Her story was that of so many people, but more importantly, what she did with that story was emblematic of our movement.

I’m often struck by how Alzheimer’s affects families over time. Part of the reaction, of course, depends on how close people were to the person with Alzheimer’s, whether they provided direct care – and I think it’s generally a very different experience for a spouse or partner than it is for adult children.

Some people come to the end of their Alzheimer’s journey and they want to run as far from it as possible. I understand that reaction, but our work is to build a movement to make a difference in the lives of those living with Alzheimer’s while we create a future without it. To change the world, we need people like Pat in Carmel, New York, Miami, Dallas, Chicago”¦ people who roll up their sleeves and join us because they see the need in their own community and at the same time keep their eyes on the prize.

Fortunately, we are blessed with thousands of people who step up, volunteer, donate, advocate and champion our cause. Our Walks in Northern California and Northern Nevada this past fall registered over 17,000 participants and engaged communities from Redding to Fresno, Reno to San Francisco.

There will come a day when we close our doors and unwind this work because we were ultimately successful, and we will get there because of people like Pat, who took her personal experience, believed it doesn’t have to be this way, and took action.