It’s time for John to give up the keys…

We are driving to an early morning doctor’s appointment. John is nervous because the appointment is with a new physician and he knows his memory is going to be tested. Getting dressed he asked me “what day is it” over and over again. I would answer as calmly as possible November 10, 2010, until I didn’t think I could stand it. I tried to have him look at the perpetual calendar that he is in charge of changing daily. Didn’t work. I had him look at his Day-Timer. Nada. Finally I handed him the newspaper and said, “Bring it with you.” 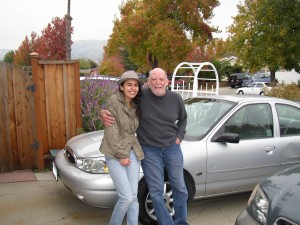 Two glowing smiles: Alyssa gets the car for her birthday.

In an effort to calm both of us, I told him to let it go. It is only one question, there would be plenty more to get right. When the time came he said it was September, was either the 10th or 29th and could be 2010. It was the first time since his diagnosis two years ago that he couldn’t answer the question correctly. He did know our city and county and all about his doctor’s office in San Francisco but called the lapel of a lab coat a flap. He was so frustrated. He asked, “Why didn’t they ask me what a stethoscope was, I know the answer to that!”

And the situation didn’t get any better when the doctor told him that he needed to stop driving. In John’s view, he was just having a bad day, gave a couple of wrong answers and boom! The car is taken away. Although he was amiable enough with the doctor””agreeing that he wouldn’t drive anymore””the ride home was tense. Eventually ,we had a long discussion about the adjustments we would need to make.

It’s been over a month and we have created a pretty good routine. Instead of John driving off to get me coffee each morning, we go together. He likes seeing everyone at his favorite coffee place and I don’t want to take that away. With the weather getting colder, we don’t go to the dog park as often and a friend has offered take John and Toby twice a week, which is plenty. My mom has said she will drive him to the store anytime he wants.

Of course the small chores John did like picking up dry cleaning, minor banking and grocery shopping now fall on me. I don’t mind, but regret that he doesn’t have those responsibilities to keep him occupied.

The biggest thing is we decided to give John’s car to our granddaughter on her birthday. We know that the car will make a big difference in her life and that makes us feel great.