Vanessa Carter and her husband, Joe Ording are looking forward to the birth of their son in January. They are already caring for Vanessa’s parents, Ted and Valda Carter, of Tiburon, who are both living with Alzheimer’s disease.

Vanessa and Joe will soon join the ranks of “sandwich generation” caregivers “” meaning that they care not only for an aging parent, but also for a child under age 18. Sandwich generation caregivers make up one quarter of caregivers for those with Alzheimer’s or other dementias.

Growing up with Ted and Valda
Valda was an actress and a teacher. She taught high school drama in Marin County. She was always learning. 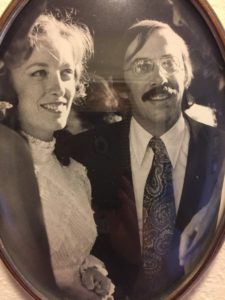 Ted was a museum curator at the Metropolitan Museum of Art of New York City and then at M. H. de Young Memorial Museum in San Francisco. When Vanessa was a baby, her father went to law school and became a family law attorney. He also enjoyed sailing.

Ted is a walking historian. Vanessa shared that “If you ask dad a question, you’d better have time for an answer.” Ted has two sons from a prior marriage, Greg and Chris, who both live in Novato with their families.

Valda managed a busy social calendar for the couple. They were an adventurous couple who traveled all over the world. Ted and Valda were very independent and didn’t need help from their children.

Changes in Valda
In 2012, Valda was diagnosed with breast cancer. That was also when family started to notice her cognitive health symptoms.

People thought her symptoms were a side effect of her chemotherapy, but Vanessa suspected otherwise. She had noticed issues before the chemotherapy started.

Valda’s mom, Vera, had also had Alzheimer’s disease. Valda cared for Vera when she was ill and feared developing the disease.

Getting a diagnosis was challenging. It was only at Vanessa’s insistence that Valda’s local neurologist administered cognitive tests.

Vanessa’s best friend works at the UC San Francisco Memory and Aging Center. She encouraged Vanessa to have her mom seen there.

In 2014, Valda was diagnosed with Alzheimer’s disease. Vanessa said that connecting with the Center to get a diagnosis “changed our journey significantly.”

Finding the Alzheimer’s Association
In spring of 2016, Vanessa left her job and moved back to Marin County. She lived on her dad’s boat while trying to figure out if she would find a new job or become a full time caregiver.

As a natural researcher, Vanessa spent many tearful days online, seeking answers and suggestions. During that research, she learned about a statewide Advocacy Day in Sacramento that the Alzheimer’s Association was holding.

While she wasn’t exactly sure what the day would involve, Vanessa signed up to attend. She felt that it was something concrete she could do.

While at Advocacy Day, Vanessa met staff from the Alzheimer’s Association and asked how she could help. “I needed to feel like I’m fixing something because I can’t fix my family,” said Vanessa. “It was really frustrating for someone who is a problem solver.” 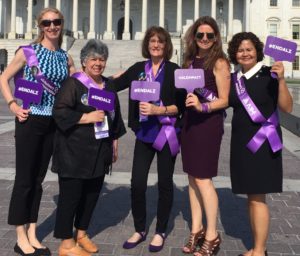 The timing worked out well, as the current volunteer Ambassador for Congressman Jared Huffman’s district was stepping down. Vanessa has served as the Ambassador for the past two years. Vanessa has also attended two Alzheimer’s Association advocacy events in Washington, D.C.

Vanessa has also become involved with the Walk to End Alzheimer’s, volunteering at the Petaluma Walk and leading a team for the San Francisco Walk. She shared that being part of the Walk has provided a great opportunity for her friends and family members to support her in a way that is comfortable for them.

Moving home
Although Vanessa and Joe were living a short distance from her parents, it was too hard to manage two residences. After Valda was referred for hospice, Vanessa decided to move back home with her parents.

Joe was very open to the idea. Joe’s mom works in the senior care industry. He strongly values caring for family and wanted to help keep Valda at home.

About a year ago, Vanessa and Joe moved in with Vanessa’s parents. In July, they got married in a small ceremony at home, so that Valda could attend. Vanessa is very appreciative of how flexible and supportive Joe continues to be.

Alzheimer’s diagnosis, round two
In 2017 Vanessa could no longer ignore the changes in her father. “In spite of everything I knew,” she admitted, “I was reticent to move forward with getting Dad’s diagnosis.” 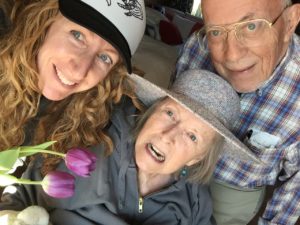 Vanessa and her parents

At the end of the Alzheimer’s Association Advocacy Forum in 2017, Vanessa was talking with two Association staff. “I burst into tears and shared that I was going to have to go home and get Dad assessed.”

Vanessa went back to the UC San Francisco Memory and Aging Center with Ted. For her brothers, this was their first experience going through the diagnostic process with a parent.

At the appointment, Vanessa, her father and brothers were able to sit with a team of experts to review the test results, including cognitive testing as well as MRI and PET scans. Ted also received a diagnosis of Alzheimer’s disease.

Differences in caregiving
As each individual living with Alzheimer’s is different, so is the caregiving journey. Valda was more resigned to what was happening. She didn’t exhibit any of the more challenging behaviors that some persons with Alzheimer’s experience. 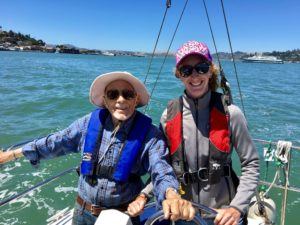 Ted is fiercely independent, used to repairing his home, car and boat. It has been difficult as his capacity to fix things has declined.

Valda has been on home hospice for over a year. While Vanessa has been able to keep Mom at home, she worries that it may be more difficult as her father’s disease progresses.

Maintaining a social life
When Valda developed cancer and Alzheimer’s, the couple’s social life dwindled. After Vanessa moved home, she signed her parents up for senior day program. Valda said no at first, telling Vanessa that the program was “for old people.”

As someone who was new to the caregiving journey, Vanessa didn’t have experience in managing her mother’s resistance. As the disease progressed, Vanessa was later able to re-enroll her parents in the day program.

The second attempt worked much better, despite some initial resistance from Ted. Vanessa was able to encourage him to go and help take care of his wife. Whistlestop transportation services have allowed Vanessa to continue to work full time.

As a historian, he particularly enjoys the museum visits and lunch outings. It provides a great opportunity for him to remain social and maintain a sense of normalcy.

Finding peer support
Vanessa is the first in her peer group to have with a parent with Alzheimer’s. She knows that over time, others will encounter Alzheimer’s in their own families.

Social media has given Vanessa the opportunity to be vocal about her experiences, including caregiving. Individuals have reached out to her privately and asked about Alzheimer’s support services. Often their loved one has recently been diagnosed and they are in what Vanessa describes as the “early panic and sadness phase, where they are asking lots of questions.”

Recently, Vanessa started participating in a Google Hangout caregiver support group that the Alzheimer’s Association offers for younger caregivers. She has enjoyed sharing with her peers. “As much as therapy is essential,” share Vanessa, “there is nothing like hearing someone else telling a story that could be coming out of my mouth.” The group supports each other through the roller coaster of Alzheimer’s caregiving.

As the evening caregiver for her parents, the virtual nature of the group is also important. It allows her to care for her parents at home and also participate in the support group.

Reassessing the caregiving situation
Vanessa coordinates the healthcare, paid caregivers and household management for her parents. Vanessa’s oldest brother, Greg, manages the all of the legal and financial affairs.

Ted adores both of his sons and delights in weekend adventures with them. Their support helps Vanessa as she cares for her mom. 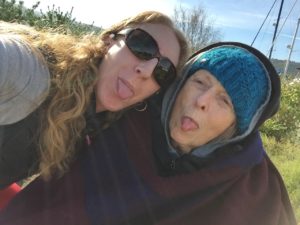 Vanessa works full-time in San Francisco. The family uses paid caregivers and the adult day program to ensure that Valda and Ted are cared for when Vanessa and Joe are at work.

As situations change and Alzheimer’s progresses, families sometimes need to make new caregiving arrangements. Vanessa’s brothers were concerned about how hard it might be for Vanessa and Joe, especially with a baby on the way. They thought that it might be best to move Ted into a care community.

For Vanessa, it was more stressful to think about going back and forth between managing a newborn at home and caring for parents in a care community. The family decided to keep their current living and care situation for now.

Advice for others
Vanessa shared her tips for other caregivers:

A fierce advocate
Advocacy has been a critical part of Vanessa’s caregiving journey. While her experience as a young caregiver may be different from that of an older adult caring for a partner, they face many of the same challenges.

“I have learned so much about the economics of caregiving and what a broken system it is,” says Vanessa. “It’s cost prohibitive for most families and yet it also doesn’t pay a living wage for those providing care in the Bay Area.”

She has enjoyed sharing her story with Congressman Huffman and his staff. “Congressman Huffman has been very supportive of our group’s asks. He has co-sponsored both pieces of legislation (PCHETA, BOLD Alzheimer’s Act) and has supported the increases in federal research funding for Alzheimer’s.” 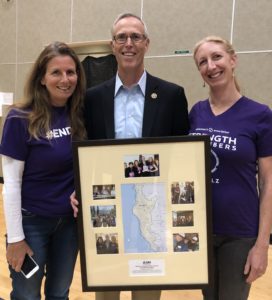 At the Alzheimer’s Association Advocacy Forum in June, Vanessa and her advocacy team received an award as the top advocacy team in the nation. She recently had the chance to thank Congressman Huffman for his support and share the award with him.

She has been excited about the work the Alzheimer’s Association has been doing to engage the public health community in the response to Alzheimer’s. Her own experience has demonstrated the need for multiple community professionals to be trained to see the signs of dementia and respond quickly and appropriately.

“My personal strategy of coping with the heartbreak of watching my parents decline has been advocacy around how we redesign systems that are currently setting us up for failure as a nation,” Vanessa said. “The trouble is brewing, but its voice is quiet. The scale of the needs of baby boomers as they age will force this redesign.”

Value of her engagement
Being an advocate helps Vanessa see that she is contributing to the bigger picture of seeking an end to Alzheimer’s. “The Alzheimer’s Association has been a wonderful place to find community,” she shared. “I wouldn’t know how to direct my energy otherwise.”

Being part of a national movement of volunteers who have helped to secure great increases in federal Alzheimer’s research funding has been very satisfying for Vanessa. Vanessa also serves on the Family Caregiver Advisory Board for the UCSF Memory and Aging Center. She enjoys the opportunity to use her voice to amplify the needs of caregivers and persons living with Alzheimer’s.

Hope for the future 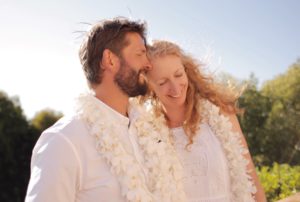 Vanessa and Joe are very excited to welcome a new baby into the family in a few months. In thinking about her son’s future in relation to Alzheimer’s, Vanessa is optimistic.

“I’m hopeful that the work I’m doing will eliminate the need for my son to do this for me,” shared Vanessa. “Rather than sticking my head in the sand, I feel like I’m participating in advocacy at a time when the stage is shifting. There are so many things happening on the research and policy fronts.”