We are deeply saddened to share that volunteer leader and former Board Member Rick Smith passed away unexpectedly on January 31st. Our thoughts are with his daughters, Ericka and Shannon, as well as his wife Euna, and the rest of their family. The staff and volunteers who had the honor of knowing Rick will dedicate our efforts to honor and celebrate Rick and his commitment to creating a world without Alzheimer’s.

“The Alzheimer’s Association lost a true champion for the cause. Rick Smith was a passionate supporter in almost every aspect of our work: fundraising, research, advocacy, care and support, concern and awareness. He rallied the community to our cause – recruiting board members, donors and families in need of help. If something needed doing, Rick was there to help! There was only one Rick. We will miss him dearly.”

Rick’s history with the Alzheimer’s Association

Rick got involved with the Alzheimer’s Association when his first wife, Susie, was diagnosed with younger-onset Alzheimer’s. Rick was Susie’s caregiver for 10 years – she died in 2008 at the age of 61. Rick started participating in the Walk to End Alzheimer’s in 2001.

Rick was a committed leadership volunteer with our chapter, involved in all parts of our mission. Rick was a former Board member, member of many committees, former Chair of The Longest Day committee, top Walk to End Alzheimer’s fundraiser and advocate. He was a relentless fundraiser and his Smith Ranch Chili Cook-Off was an event to remember. He and his family have raised over $300,000 for the Alzheimer’s Association. Rick supported fundraisers such as Memories in the Making Art and Wine Auction and Reason to Hope as a past committee member, donor, and supporter. His lively auction bidding was always fun to watch. Rick had already set up his team for The Longest Day this year – Rick’s Tin Cuppers. 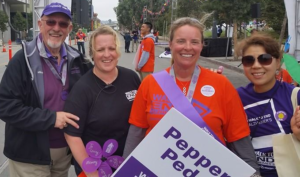 Rick, with his family at Walk

Rick volunteered to give educational presentations, frequently agreeing to travel to more remote parts of our chapter territory.

Rick was such a voice for all of us – and was intimately involved in our advocacy work, attending Alzheimer’s Advocacy Day in California and the Advocacy Forum in D.C., becoming an Ambassador for Congressman McNerney and serving on the California Alzheimer’s Advisory Committee. He read everything the Association sent him, and turned it around immediately to advocate for others.

Rick’s passion and determination brought others to our cause. He was a friend and supporter for many of us in our work, and a tireless advocate. Rick showed up to every activity wearing Alzheimer’s Association gear and was very well informed, citing data and breakthroughs, often events that had happened just the day before. 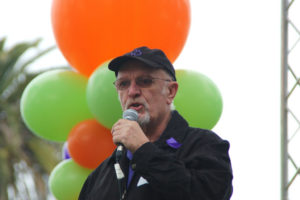 Rick was full of enthusiasm and energy for our work. Staff, other volunteers and event participants appreciated Rick’s words of encouragement, tips and his smile. We learned so much from him, and he inspired us – by his example – to be relentless. He will be greatly missed.

“If I have seen further it is by standing on the shoulders of Giants.”
– Sir Isaac Newton