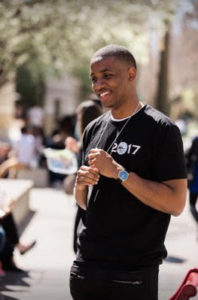 The burden is particularly heavy for millennials whose parents suffer from young-onset Alzheimer’s. Over 200,000 adults have been diagnosed with young-onset Alzheimer’s dementia in the United States. Their children are experiencing now what their peers may not experience for another decade or two: becoming their parent’s caregiver. They may need to stop working or drop out of school, and they are less likely to have information about Alzheimer’s than older caregivers.

On April 24, we teamed up with the American Medical Students Association California State University East Bay Chapter, and U.S. Congressman Eric Swalwell, and invited local millennials to participate in a community forum on the unique needs of young adults who are caring for parents or grandparents with Alzheimer’s or related dementia.

25-year-old Victor Washington from Berkeley is one of those who shared his story. His mother was officially diagnosed in the beginning of 2016 with young-onset Alzheimer’s at the age of 59. During this time, Victor was in his senior year of college, expecting his first-born son, and working part time. With little to no help, he managed to secure Social Security payments for his mother, and became her legal proxy.

In September 2016, he began his first year of graduate school, studying for a Masters in Social Work at Cal State East Bay. He is currently working, going to school, and supporting his mother by paying her bills, preparing her meals, taking her shopping, and keeping track of other various tasks and duties.

Victor says his mother struggles emotionally with her diagnosis and is fearful of the future, and that she often expresses her feelings and concerns to him. She is unwilling to attend support groups because she doesn’t want to leave the house, and doesn’t want anyone but Victor to care for her, so he has struggled to find community resources that can help them.

“I encounter periods of emotional turmoil as I attempt to balance the life of a father, partner, student, intern, employee, and caregiver,” Victor said. “I often worry about my mother’s future once she can no longer live safely by herself, because Medi-Cal and Medicare don’t cover assisted living, and there aren’t enough nursing home beds that take Medi-Cal.”

Listening to Victor was a deeply moving experience for everyone at the forum, and we hope Victor’s story will inspire other millennial caregivers to share their stories with us, too. To share your experience as a millennial caregiver, contact Jessica Rothhaar, Policy and Advocacy Manager, at jrothhaar@alz.org.