Gail Coats shares how her husband got inspired to ride his bike 40-50 miles a day for Alzheimer’s awareness. 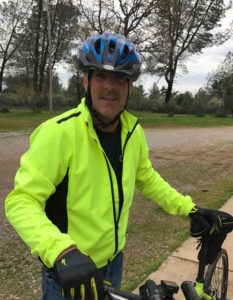 My husband, Dan, has early onset Alzheimer’s disease. He is only 51-years-old and was officially diagnosed last year with posterior cortical atrophy (PCA). In my opinion, I believe he has been in the moderate stage for the last 3-4 years. He is no longer able to work, but is still able to stay at home by himself. He takes Aricept and Namenda, and rides a bicycle 40-50 miles almost every day for exercise.

During his rides, Dan gets frustrated because people are really inconsiderate and don’t want to share the road. It’s actually pretty dangerous as we live in a rural area that really doesn’t have designated bike lanes.

He decided that he wanted to wear a shirt while riding that said something on the back to draw the attention. Unfortunately, with set up fees and minimum orders, we were not financially able to have shirts printed up. I had the idea of contacting the Alzheimer’s Association to see if it would be possible to get some shirts. That is when I learned about The Longest Day.

Although it wasn’t exactly what Dan had in mind initially, we decided to start a team and are glad that we did. The supporting materials are awesome. When people ask about his shirt, instead of trying to explain in his own words (which is difficult for him), he can give them a card or a flyer directing them to the website, and hopefully they will donate or join in. This is still a work in progress, but we are working on it. He will continue to ride as long as he can, and for The Longest Day, he will be riding with a group.

As we are, I would encourage anyone going through this to just take it day by day. As for the patient, don’t be idle, get out there, do what you are able to, and try not to get discouraged. And for the caregiver, be patient. Join a support group. No one can even imagine what you are going through unless they experience it first-hand.

Alz.org has been a great source of information and everyone there has been extremely helpful. I was also invited to a local support group where I learned a lot about what I was doing wrong. So hopefully I can start doing some things right.