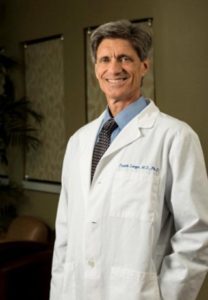 A Bay Area researcher was recently featured on the cover of Time Magazine for his team’s pioneering work on Alzheimer’s therapeutics. Frank M. Longo, MD, PhD, is Professor and Chairman of the Department of Neurology and Neurological Sciences at Stanford University School of Medicine and founder and Chairman of biopharmaceutical firm PharmatrophiX.

Dr. Longo is scheduled to speak at the 19th Annual Alzheimer’s Association Updates on Dementia Conference, which will take place on May 11, 2017 at the South San Francisco Conference Center. “Updates on Dementia” is the largest dementia- specific educational conference on the West Coast. Dr. Longo will present the latest developments in Alzheimer’s prevention and treatment.

Many researchers target the brain plaque that’s believed to cause Alzheimer’s disease. But Dr. Longo says this approach is working at the edges of the problem. LM11A-31, the drug he developed, is designed to keep brain cells strong, thus shielding them from the plaque.

Neurons are brain cells that transmit signals quickly and effectively to accommodate changes that occur in the body. Buildup of amyloid plaque in the brain is thought to trigger cell death. As neurons are dying, the brain shrinks in size and certain parts, specifically the hippocampus (responsible for memory), start to deteriorate.

So far, treatments that focus on breaking up the excess amyloid in the brain have not been shown to improve cognitive function. Dr. Longo has focused his research efforts on a diagram of 14 signals passed among brain nerves that are triggered by amyloid, and may cause the neurons to die. He’s found that his treatment can halt at least ten of those signals.

In mice, LM11A-31 has been shown to reverse neurological damage. Dr. Longo and his team are hoping the phase two trial in humans will open up a new way to tackle Alzheimer’s disease.

According to James Hendrix, Director of Global Science Initiatives at the Alzheimer’s Association, if approved, a drug like this will change the course of Alzheimer’s rather than just treat its symptoms.

The Alzheimer Association Part-the-Cloud Program provided funding for the first phase of the LM11A-31 drug trial.