Proof that inflammation can happen in the brain 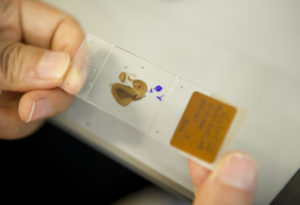 According to Joseph Rogers, PhD, of SRI International, inflammation occurs in the brain of individuals with Alzheimer’s as a reaction to the formation of plaques made up of beta amyloid (sticky fragments of protein that wreak havoc in the brain over time).

Dr. Rogers explains that presence of amyloid in the brain is clearly abnormal – “It’s almost like a splinter in your brain, and you’ve got thousands of them, so you’re going to have an inflammatory attack as the response cells move in and try to get the splinters out of your brain.”

Inflammation is a double-edged sword. It destroys bad cells, but it can also destroy healthy tissue in the process. In a brain with Alzheimer’s, it can damage the nerve fibers that connect the healthy brain cells. This process happens slowly, but the brain cells die eventually.

Dr. Rogers and his team decided to take healthy brain cells, introduce microglia to them, and add amyloid to the mix. This experiment caused the connections between nerve cells to disappear, and the healthy brain cells died. Dr. Roger’s breakthrough research has since influenced other scientists to study the brain’s inflammatory system to develop drug treatments.