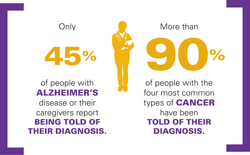 Below is a summary of the report’s key findings specific to diagnosis:

The Alzheimer’s Association believes disclosing an Alzheimer’s diagnosis should be standard practice. We believe that people with Alzheimer’s disease have the right to know the truth about their diagnosis. Disclosure of the diagnosis can be done a sensitive and supportive manner that avoids unnecessary distress, and gives the person with Alzheimer’s the opportunity to play an active role with his or her family in planning for the future.

With 11% of Californians and 9% of Nevadans over the age of 65 living with Alzheimer’s disease and those numbers expected to grow by 17% and 25% respectively, we need real progress in the fight against Alzheimer’s including making an Alzheimer’s diagnosis standard practice.

For more information on the importance of diagnosis disclosure and to view the full report, please visit alz.org/facts.