Finding the “sweet spot” as a caregiver and daughter 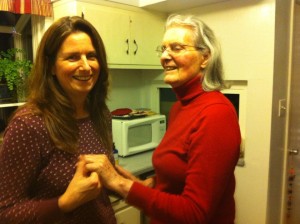 Erin and her mother

Erin Kane is a volunteer advocate for the Alzheimer’s Association and loving caregiver to her mother. This is her caregiver story:

I’ve spent the past 7 years living with my mother who was diagnosed with Alzheimer’s in 2006.  She continues to be physically fit in spite of her declining ability to communicate verbally, or even think, really.  I think.  It’s so hard to know what is actually going on in her mind because every once in a while she comes out with a clear statement that surprises me.  It’s often a simple statement, appropriately timed, like, “I love that,” or “Excuse me” when she sneezes, so SOMETHING is still happening in that brain of hers.

For the past several months she’s been experiencing symptoms of apraxia, described as “a neurological condition characterized by loss of the ability to perform activities that a person is physically able and willing to do.”

Mom often understands simple instructions, but cannot execute them.  The biggest issue we face is that she often ends up on the floor when her intention is to sit down in a chair.  She misses the chair not by a few inches, but by several feet.  She might see a chair across the room, but she’ll sit where she stands.

What I’ve come to discover, though, is a silver lining to her current condition.  We’ve never been a particularly warm and fuzzy family.  Not that love wasn’t ever expressed, but we were never very huggy-kissy.  Until the last few years.

It started out of necessity, really.  The fact that she can’t communicate well verbally means that I’ve had to find other ways to reach her.  When her brother and his family came for a visit a few years ago, he asked, “Will she know us?  Will she be able to talk to us?”  I didn’t know what to tell him.  Mom’s social skills were still pretty good at the time (they’re not bad now, on occasion!), so I told him it was more a matter of figuring out how to express love in new ways.

A beautiful thing that has come out of the last few years, for me, is the connection I have with Mom through music.  She was a jitterbug/jive dancer when she was a teenager back in the mid to late 50’s and still thoroughly enjoys music, even though now, thanks to apraxia, she can only sway back and forth a bit.  But, she gets into it, whether she’s sitting or standing, Frank Sinatra can get her hips wiggling, her feet tapping, and her shoulders swaying.  The truth is that now almost ANY music can get her going.  I’ve even gotten her to boogie to Pearl Jam!

I saw a video on Facebook several months ago in which a woman working with advanced Alzheimer’s patients talked about and demonstrated how gently stroking a patient’s cheeks, as a mother would her baby, brought this particular patient back from a seemingly incoherent state to be alert enough to sing gospel songs with her. I was already familiar with the magic of music, but the stroking of the cheeks gave me an idea.  Ever since then, after washing my mother’s face in the mornings, I always rub some lavender lotion on her face, lingering on her cheeks.  And, when I do, she smiles.  The same thing when I brush her hair, or rub lemon verbena lotion on her hands.

I’ve ridden horses throughout my life and we horsey people always try to find the “sweet spot” on our mounts – that spot, like the spot just above a dog’s tail, that when rubbed makes the horse swoon with delight.  It’s the same with Mom, whether it be just the right song, just the right fragrance, or just the right touch.  Find the sweet spot and she’ll feel the love even if she can’t tell you.