A Life Marked by Love and Kindness 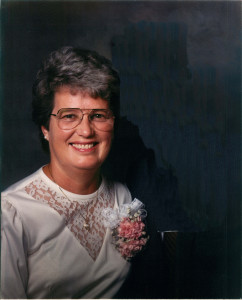 Hal Ellis first noticed his second wife, Pearl, when they worked together at the Amphenol Corporation in Los Gatos, Calif. The company’s annual inventory was in process “” an immense undertaking that kept employees up into the early hours of the morning. Pearl, who had just started working at Amphenol, caught Hal’s attention with her kind and considerate nature.

“Around 12:30 a.m., Pearl brought in a tray of hot coffee and rolls for the workers,” Hal said. “It was a rare act of kindness for a new employee “” or an employee anywhere.”

Pearl’s warm, nurturing personality was a distinguishing trait throughout her life, easily visible in both her personal and professional life “” and in her eventual battle with dementia.

Pearl was born in 1925 in Fargo, N.D. After high school, she traveled to Chicago, where she took a job at Illinois Tech College and met her first husband. Together, the couple had three children “” William, John and Karen “” and moved to Southern California. However, the marriage ended in divorce.

Hal and Pearl began dating shortly after they met at Amphenol and were married in August 1970. Marrying Pearl was “the smartest and happiest thing” he ever did in his life, Hal said. A second marriage for both, their union brought together seven children.

After Amphenol went out of business in 1971, Pearl continued her career at Quadrex Corporation, working her way up to a role as executive secretary for the vice president of international operations, the highest position a female held in the company at that time.

Throughout their marriage, Hal continued to observe the kindness that initially attracted him to Pearl.

“Pearl was a wonderful person, both inside and out. Those that knew her loved her. She was always very thoughtful and looked after others’ feelings “” sometimes at her own expense,” said Hal.

An animal lover, Pearl had a special affection for cats and dogs and would carry biscuits in her pockets to feed any she would meet. She especially loved the cartoon character Snoopy and decorated the house with figurines of the dog at Christmastime.

“Christmas was Pearl’s favorite time of year, and she was at her happiest then,” said Hal. “Our friends and family would come by to look at her display of stuffed animals and mechanical and talking Christmas toys.”

Pearl’s way with animals stretched beyond dogs and cats. One summer, she and Hal went on a vacation to Massachusetts, where Hal’s sister lived on several acres of open land. Pearl quickly became friendly with two horses living in a corral in the backyard, feeding them carrots on a daily basis. She also met a more unusual animal.

“My sister had a rooster named Luigi who roamed free,” said Hal. “Pearl would yell, “˜Luigi! Luigi!’ and the rooster would come running. She fed him out of her hand. I had to keep checking to make sure she had five fingers left!”

In 1989, Pearl and Hal retired, and they began a new adventure “” traveling. During her career at Quadrex, Pearl won two trips to Hawaii, and she and Hal embraced the travel bug. From 1989 to 2010, they took more than 100 vacations, including 35 cruises to locales including China, Russia, Tahiti and Alaska.

Unfortunately, their trips came to an end in the fall of 2010, when on a flight to New England, Pearl collapsed and the plane was diverted to Denver for an emergency landing. She was taken to the hospital and treated for dehydration.

Pearl’s health seemingly improved, but in March 2011, she collapsed due to weakness in her right leg and hip and was rushed to the hospital. She returned home, but collapsed again two days later. Occasionally, she experienced trouble swallowing and had to receive nourishment through a feeding tube. Her doctors began to suspect that dementia was causing her physical decline. Although Pearl returned home, she required around-the-clock care from Hal and a professional caregiver.

Throughout her struggle with dementia, Pearl maintained her friendly, outgoing personality. Although she could no longer care for herself, she regularly played cards, talked on the phone and kept her weekly appointment with her hairdresser.

In September 2012, Hal made the painful decision to move Pearl into a care facility. For a couple who spent so much of their time together, they found it extremely difficult to be apart. Hal visited with Pearl every day, leaving only to drive home before dark.

“She was getting progressively worse,” said Hal. “I would tell her, “˜I’ll be back tomorrow morning at 8,’ but I wasn’t sure if she understood. She always wanted to know why I was leaving.”

In January 2013, Hal moved with Pearl into a care facility that could accommodate them both. Sadly, their time together was short lived. On Feb. 11, 2013, Pearl lost her battle with dementia. Hal was by her side “” as he had been throughout their life together.

In August 2013, Hal made a generous donation to the Alzheimer’s Association research program as a way to honor Pearl “” a woman whose life was about giving rather than receiving.

“Half of the money I have belongs to Pearl,” Hal said. “And I was inspired to give by considering what was important to her.”

Hal visits Pearl at the cemetery twice a day. He sits outside her crypt on a bench inscribed to read:

In loving memory of Pearl Marie Ellis, my beloved wife
We shared over 42 years of both happiness and sorrow
A beautiful lady on both the inside and out
She will be loved forever by me and the many whose lives she touched.
“”Her loving husband, Hal Ellis