One day, while visiting her sister, my mother wandered off. My aunt and I had left her alone in the living room for what seemed only a moment. When we returned, we discovered she had taken off for parts unknown. In the middle stages of Alzheimer’s Disease, my mother was unaware that she was more than 50 miles from home. She did not have (or know how to use) a cell phone and wasn’t carrying identification. Frantically, my aunt and I scoured the neighborhood. Luckily, we found her less than an hour later, strolling on the college campus across the street from my aunt’s house. Breathless, I wrapped my arms around her and exclaimed with relief, “Mom!” She smiled and said evenly, “Oh, hi, honey. What are you doing here?”

That story ended happily, but for people with moderate to severe Alzheimer’s Disease and those who care for them, wandering (whether on foot or by car) can be a nightmare. Persons with Alzheimer’s may not remember their name or address, and may become disoriented, even in familiar places. Finding the missing person in the first 24 hours is critical. The longer they wander, the more likely they will become dehydrated, skip taking critical medications, suffer serious injury or worse. 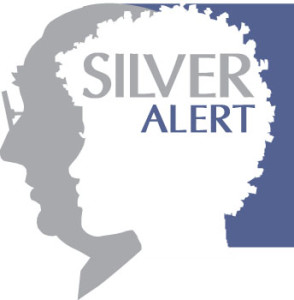 Now, thanks in part to efforts by the state Alzheimer’s Association, California has a new system to help locate disabled or cognitively impaired persons over age 65 who go missing. It’s called the Silver Alert, and it took effect January 1, 2013.

Modeled after the Amber Alert for missing children, the new law authorizes local police to ask the California Highway Patrol to issue an electronic bulletin seeking public, news media and broader law enforcement help to find the person. To activate a Silver Alert, the CHP must determine that the elderly person is in danger due to age, health, mental or physical disability, environment or weather conditions.

The new law, which contributed to the safe return of three elderly Californians in just the first month, demonstrates the importance of advocacy by local chapters of the Alzheimer’s Association. While the Association’s efforts in raising awareness of Alzheimer’s and supporting families living with the disease are well known, its advocacy efforts are often less visible.

The Association strives to be the leading voice for Alzheimer’s disease advocacy. Drawing upon a vast network of experts, the Association works to educate decision makers and other influencers on the economic and emotional toll that Alzheimer’s takes on families and the nation, engaging elected officials at all levels of government.

Passage of the Silver Alert program in California shows how advocacy can lead to meaningful change. After State Sen. Elaine Alquist introduced the Silver Alert bill last year, advocates with the public policy office of the Alzheimer’s Association of California reviewed it and submitted a letter of support. Knowing that legislators who haven’t experienced the terror of searching for a loved one might not realize how vital a Silver Alert could be, Association advocates testified on the importance of the speedy and safe return of wanderers, estimated at 60 per cent of people who suffer dementia. Association staff also met with legislators on the public safety and other committees to urge them to support the bill.

Ultimately, the Silver Alert program passed with strong bipartisan support, and was signed into law by Gov. Brown. By sharing real stories of persons living with the disease, advocates bring policy issues to life, providing powerful evidence of why change is needed, and demonstrating tangible ways legislators can improve outcomes for vulnerable Californians and their families.