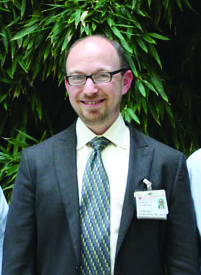 The Alzheimer’s Association is pleased to announce two new grants were awarded in our Chapter:

Geoffrey A. Kerchner, M.D., Ph.D. from Stanford University will pursue Hippocampal Striatal Anatomy in Mild Cognitive Impairment: A 7T MRI Study. In preliminary research with human volunteers, Dr. Kerchner and colleagues tested a new MRI procedure called ultra-high field 7-Tesla (7T) MRI. This high-resolution technique produced images that detected cellular-level changes in a region of the hippocampus, which may prove to be helpful for indentifying people with early Alzheimer’s. The hippocampus, a brain region important for learning and memory, is one of the most vulnerable regions in early Alzheimer’s disease. For this study, the researchers will build on their earlier research, hoping to show that the combination of cerebrospinal fluid testing and 7T MRI assessments can provide an optimal way of diagnosing an individual’s risk of progressing from Mild Cognitive Impairment to dementia. See Dr. Kerchner speaking at our local education conference at www.youtube.com/AlzheimersNVCA (click the Research Talks section).

Susanna Rosi, Ph.D., from the University of California, San Francisco will study Restoring Synaptic Plasticity in a Transgenic Rat Model of Alzheimer’s Disease. Dr. Rosi and colleagues have been studying inflammation in the brain, focusing on the role of a hormone-like molecule known as tumor necrosis factor-alpha (TNF-alpha). Increased levels of TNF-alpha in the brain have been implicated in the inflammation that occurs during the early stages of Alzheimer’s disease. Dr. Rosi’s team plans to use a strain of rats that have been genetically modified to exhibit essentially all the pathologic features of human Alzheimer’s disease. They will treat these rats with a drug known to inhibit the activity of TNF-alpha and determine if the treatment prevents the progression of Alzheimer’s-like pathology in the brain.

The researchers will also use molecular techniques to study the activity of genes associated with synaptic plasticity, to determine if drug treatment restores the ability of brain synapses to perform this function vital to memory. These studies will probe the role of a key cause of brain inflammation and may identify a specific target for future therapies to prevent memory dysfunction in Alzheimer’s disease.

Stay tuned for more about local studies funded by the Alzheimer’s Association and read about all of the studies we fund at www.alz.org/research.