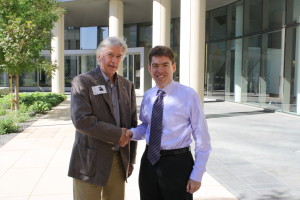 The Alzheimer’s Association awarded this grant to fund Dr. Rabinovici’s study Imaging and CSF Biomarkers in the Diagnosis of Early-Onset Dementia.

Here’s some background to help you understand the goal of his study:

The researchers plan to enroll 40 people with either early-onset Alzheimer’s disease or frontotemporal dementia and perform brain imaging and measurements of CSF biomarkers. The researchers will assess how each technique improves the accuracy and reliability of diagnosis, as well as the ability to distinguish between Alzheimer’s disease and frontotemporal dementia. These studies will provide valuable information about the reliability of PET brain imaging and CSF biomarkers for the diagnosis of dementia in people younger than 65 years.

The latest on research