Next comes a great reminder to use The Longest Day to get re-charged with inspiration to fight for this cause! Sherrie is a regular contributor to our blog and is a long time advocacy volunteer who lost her mother to Alzheimer’s. 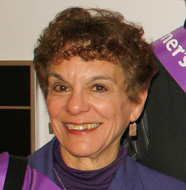 I sleep pretty well now. This was not the case when my mother lived with me. We moved her cross country, from Florida to San Francisco, after my father died because we suspected she had Alzheimer’s disease. Although the signs were unmistakable – the memory loss, confusion, repeating herself and even getting lost on familiar streets – we resisted this reality for some time.  After all, my parents were still in their 60s when Dad died. It couldn’t be Alzheimer’s, could it? It could, and it was.

Since Mom needed regular supervision, which would be non-existent if she lived on her own, she moved in with us. She had to endure the grief of having just lost a husband and the disorientation of living in a brand new city. Since my focus was on her, I thought little about what my responsibilities would be, or how my life would change. NaÃ¯ve? Perhaps. But it was comforting to think that I could reacquaint myself with my tender, lovely, compassionate mother again after having fled the nest so many years previously. That, I thought, would be a gift.

Soon, the book “The 36 Hour Day” (which had a permanent place on my bedside table) made perfect sense to me, as our “longest days” were followed by even longer nights. Even in the early stages of her Alzheimer’s, a sensible bed time for Mom meant that an hour or two after saying “good night” she would be up and dressed, just when I was so weary that falling into bed signaled nirvana. Then, the routine began; we would (hopefully, calmly!) try to convince her it was better to sleep. So, undressed her we did, and back on went the PJ’s. This ritual happened two or three (sometimes more) times a night, tucking her back in each time. So, by the time the alarm rang in the morning to ensure I got to work on time, I was utterly exhausted.

As Mom’s disease progressed, evidenced by her restlessness, wandering, mobility impairments, inability to speak coherently, incontinence and eventual eviction from one of her day programs, the days felt longer and the nights seemed endless. Hearing Mom shouting “Get out of my house” at the reflection in the mirror (she no longer recognized herself) at 2 a.m. did not make me the cheeriest person on the planet.

So, after eight years, we recognized that our home was no longer the wisest choice or the safest environment for Mom, and it seemed the only avenue left open was a nursing home”¦there, she spent her final years. Alzheimer’s won”¦it finally ran its course, having led her from the early frustrations, to outright fright, and finally into a sea of nothingness.  This was no gentle guiding; it was a force that took her where she didn’t want to go. Unfortunately, she didn’t have a say in the matter.

The impatience I sometimes felt caring for my mother did not make me proud. But, I’d give anything to have those long days back so I could get another chance at being a better caregiver for her. We have much more knowledge now and better support systems than we did years ago and I believe my mother’s journey has helped others. By continuing to be involved in issues that are important to people with Alzheimer’s and those who love and care for them, my mother remains with me. I think of her sweetness in the face of extraordinary misery and I want one last chance to tell her I love her.

So, today on June 20, the year’s longest day, I will stretch those hours, think of Mom, and of all the people who are in her shoes now, or will be in the future. We need to make use of these long days to fight, fight, fight for more research dollars, for a cure and for meaningful emotional and financial help for families struggling every day. I think Mom is smiling at our progress and is ever hopeful that we will continue to do better.