Recap: Why has finding a cure been so hard, and can music help?

It’s yet another packed house at our education conference today in Petaluma, Calif. The morning started with The Pathological Course of Alzheimer’s Disease: Why Finding a Cure Has Been So Hard by Owen Carmichael, Ph.D., assistant professor, Department of Neurology at the University of California, Davis.

“Imagine you are a farmer and you leave the stable doors open,” he said. “What happens next?”

How can you save the farm?

This analogy illustrates the challenges to finding new treatments for Alzheimer’s disease. Many of the treatments being studied only address one problem – and often when damage has already been done and it’s too late to reverse it. There are several different factors that contribute to the Alzheimer’s disease process. New treatments and research into the causes and prevention of Alzheimer’s will require a combination of approaches much earlier in the disease process if we are to see results. It’s hard to know which combination(s) will work at which stage in the disease and for how long! 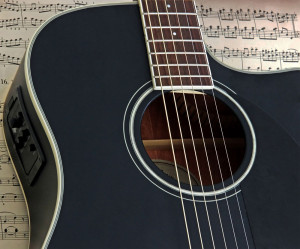 But she is also quick to clarify that  the scientific evidence on music therapy is still inconclusive. “There is no substantial evidence to support or discourage the use of music therapy in the care of older person with dementia,” she says. “We don’t have good ways to test somebody’s knowledge about music and how they are processing music.”

So why does music seem to work with individuals with dementia? There are several reasons. First, music is strongly tied to our emotions: it can evoke emotions, is often present during events in our lives that have emotional meaning and can be a powerful cue to facilitate the recall of memories from our lives.

Music is also strongly tied to movement: specifically, music can give us an automatic urge to move in response, inspiring a “feel good” effect that requires both sensory and motor skills.

She recommends that music therapy can be effective with individuals with Alzheimer’s disease. It is something that exists in all cultures, it brings people together and aids in communication and shared emotional experience. Using music as therapy has the potential to enhance quality of life, reduce stress and agitation, provide for expression of emotions, inspire physical activity and promote dignity and respect.