Bruce Bochy tapes a PSA for us at ATT Park 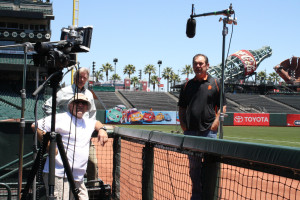 Bruce Bochy rehearses in the Giants' dugout at AT&T Park

I am often reminded of how rewarding my work is, but every now and then my job calls on me to do something that is just plain fun and yesterday was that day. We spent about an hour and a half on the field and in the Giants’ dugout at AT&T Park on a beautiful day while the grounds crew worked all around us to prepare for the evening’s game. We were there to set up and film our public service announcement for the Walk to End Alzheimer’s with Giants’ skipper Bruce Bochy. As most of you know, Bruce Bochy is the manager of the World Champion San Francisco Giants and he has helped us out since he joined the Giants five years ago.

He lost his mother to Alzheimer’s while he was in his first spring training with the Giants and we reached out to him to invite him to support our Walk and he’s done so every year since. I’m a baseball fan and loved being there and I very much appreciate Bruce taking time out of his very busy schedule – in addition to managing the Giants, he’s preparing to lead the National League team in next week’s All-Star game – to be with us. He filmed the spot three times and then took time to watch the film and choose his favorite before heading back up the dugout tunnel. You can see all of the photos from our time at the park here: Flickr photo album “Bruce Bochy PSA Spot”

A couple of weeks ago while watching the Yankees/Cubs game on television, the on-field announcer, Bob Rosenberg, was wearing a purple bowtie with the Association’s logo and commented that he was wearing it to honor the Association’s great work supporting Alzheimer’s research and in honor of Joe Girardi’s “Pops.” Girardi is the manager of the New York Yankees and has a dad with Alzheimer’s in Illinois.

I admit to a somewhat skewed perspective on these things. Of course, it’s a tragedy that anyone has Alzheimer’s. I often think when I speak to a large group of family members, how fundamentally unfortunate it is that we’ve come together. Still, it lifts our spirits and makes moving concern for our cause easier when people like Bruce Bochy, Joe Girardi, or recently Glen Campbell are willing to be open and talk about their relationship to Alzheimer’s. Former President Reagan lurched the conversation forward when he shared his diagnosis with the world, but then he disappeared. Campbell’s role is fundamentally different in that he has shared his diagnosis and wants to continue to perform and work in his chosen field.

So, Go Giants! And come join us for Alzheimer’s Awareness Night at the Giants on Monday, August 1 at 7:15pm. Special event tickets for seats in the awareness section (view reserve infield) are just $24, with partial proceeds benefiting the Alzheimer’s Association Walk to End Alzheimer’s.  Visit the link below to purchase tickets online or call 415.972.2298 and be sure to mention that you are attending Alzheimer’s Disease Awareness Night.