I joined our team in Sacramento Saturday for the Association’s Memory Walk. A record crowd turned out to create a world without Alzheimer’s and make a difference in the quality of life for those who live with it. It may sound odd, but I’m always impressed at how many strangers come to these events”¦ strangers to me, that is. I know lot’s of Alzheimer’s families, volunteers, donors, but we arrive at the Walk early on a Saturday morning and suddenly there are hundreds or thousands of people with homemade t-shirts, signs, photos of loved ones. It’s a testament to the cause that so many people we’ve never met feel part of this movement and want to be present to honor and remember and resist. 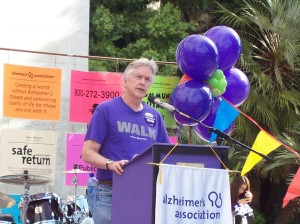 Saturday on the lawn of the California State Capital I met Lexi Redding who spoke about her grandfather, “Papa Ron,” who passed away from Alzheimer’s only two weeks before the event. Lexi and “Team Redding” are emblematic of the folks I meet at the Walk”¦ a 20-year old who was obviously close to her grandfather and who was dealing with her grief and sense of helplessness by organizing and doing something about it. She spoke to the media that morning and then addressed the crowd, imploring them to take action to create a different future for families to follow.

Likewise, the people in the early stages of Alzheimer’s shared their stories: Mike, who joined us at the San Francisco Walk to tell his story and urge the crowd to stay the course; Arthur, who told San Jose walkers the story of how Alzheimer’s forced his retirement from an accounting career; Kathleen, who overcame her anxiety and agreed to be interviewed by her local paper to support the North Bay Walk.

I’ve often been struck by the impact of Alzheimer’s on families and how often they want to tell their story. At least every other month we receive a note from a chapter of the Association about a book written by a family member from their area. Some of the books – “Alzheimer’s: A Love Story,” by Ann Davidson – are very good, insightful and helpful to those on the journey. Others, not so much, but all of them come from a very personal experience with the journey that wants the world to know how hard this is.

Some of this comes from the nature of the disease and the length of time from beginning of symptoms to the end. The caregivers, the family and friends around the person are so much more a part of the journey because of the nature of the loss. My mother had cancer and after her surgery, she got to decide on post-operative therapy and then she went back to work. With Alzheimer’s, a very different story.

The take-away for me is that the Alzheimer’s Association needs to devote more resources to helping people like Lexi and Kathryn tell the story, to raise concern for the cause, and insist on a public response equal to their passion.