New Alzheimer’s Researchers Give Hope for the Future

Dr. Berry and colleagues will determine whether changes in tau and dopamine correlate with the ability to perform common  financial tasks such as using a reviewing a bank statement. They are looking at subtle brain changes that occur before someone is diagnosed with Alzheimer’s or mild cognitive impairment.

The study findings may help identify individuals at risk for poor decision making. This could lead to the design of education and support tools for older adults with early-stage Alzheimer’s disease, to help them stay independent.

Dr. Shanbhag and his colleagues recently found that Alzheimer’s-like mice develop a particularly severe form of DNA damage called “double-strand breaks” in their brain cells. The mice also show decreased levels of a protein known as breast cancer type 1 (BRCA1) in the brain. This protein can repair double strand breaks in DNA.

Dr. Shanbhag’s research could reveal a genetic mechanism that may increase Alzheimer’s risk. Preventing DNA damage or promoting its repair could lead to the development of therapies to slow or halt Alzheimer’s disease.

Nerve cells in the brain use electrical signals to communicate across complex networks. In Alzheimer’s disease, electrical activity can become abnormal and lead to seizures and other harmful events. It has been difficult to identify how this dysfunction occurs.

The results could show how nerve cell activity becomes abnormal in Alzheimer’s and how the disease progresses. This research could also lead to novel methods for diagnosing and treating Alzheimer’s. 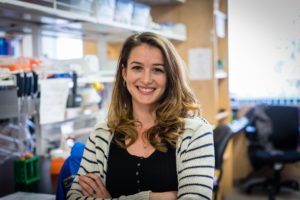 We were moved by Lindsay’s presentation at the Alzheimer’s Association Leadership Summit earlier this year. At the age of 18, she decided to become an Alzheimer’s researcher.

One of the features of Alzheimer’s disease is inflammation in the brain. Microglia are immune cells that control brain inflammation and clear toxic proteins such as beta-amyloid and abnormal tau. When microglia become over-activated, this function may be impaired.

Dr. Hohsfield and colleagues have used a drug that depletes the brain of over-activated microglia. When the drug is removed, new microglia are generated that appear to have more neuroprotective properties. They will repeat this method and determine if it can help prevent brain changes associated with Alzheimer’s disease.

This research could shed new light on the role of microglia in Alzheimer’s and explore the effectiveness of a potential treatment to reduce inflammation in the brain. These findings could lead to therapies that regulate microglia function to help slow or prevent disease progression.

We are committed to funding research
The Alzheimer’s Association funds independent investigators worldwide through our International Research Grants Program. Since awarding our first grants in 1982, we have grown into the largest nonprofit funder of Alzheimer’s research. Over the life of our grants program, we have invested over $405 million in more than 2,600 scientific investigations.