Why I Walk: Kathy’s story 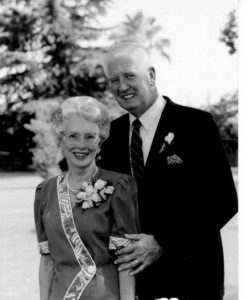 “To see someone you love go through Alzheimer’s is heartbreaking. To see first hand how frightened they are is terrible. I don’t want to go through it or have my kids go through it.

Kathy Suttles is participating in the Fresno-Clovis Walk to End Alzheimer’s along with her company team, REMEMBER ME, in honor of her dad Bob Suttles. Read her story below.

When did you find out about your Dad’s Alzheimer’s?

My Dad was diagnosed with Alzheimer’s in 1996, but looking back I realize that he had shown symptoms for years before he was formally diagnosed. My father passed away on June 25th, 2001 after a 10-year battle with Alzheimer’s disease. He was only 72.

It is hard to see someone you love get frightened by the confusion of everything going on around them. I learned that it was much easier to be patient and go along with him in order to not frustrate him or create more alarm.

How did the disease impact your family?

One event that stands out is coming home and finding my mom upset and crying because my dad was adamant about moving the entertainment system. Having been a truck driver for 45 years, he would often revert back to work as the disease progressed and was sure that he needed to load and tarp his truckload.

Rather than argue with him I decided to help him tarp his load. We threw the ropes back and forth over the imaginary yet “real to him” truckload and tied it all down. We did this multiple times until I was finally relieved of my duties when dinner was ready. As unconventional as this is, it is a special memory that I have with my Dad that still makes me laugh. It’s the only load that I’ve ever tarped in my life and wonder to this day if I tied the knots correctly though he seemed quite satisfied with my work.

My mother was the love of my dad’s life and his around the clock caregiver. She would help him get ready for each day and be there every step of the way. One morning when I was there and she was helping him shave, she left the room. He turned to me and said “she is so good to me.” At moments of clarity he would recognize her and know that she loved him so much.

What were some of the challenges you faced?

It was very hard for us when it came time to put my dad in a care facility. Some of the caregivers lacked the patience and the knowledge to help care for my dad. For example, they would drop off his tray of food and leave the room. By this time his Alzheimer’s had progressed so that he was unable to perform basic functions such as eat on his own so my mother always made sure she was there to feed him.

My dad was the kindest and sweetest man, but he would often become upset or even combative due to his confusion and frustration with his caregivers. My mother would stay with him most of the day to make sure he was receiving adequate care. To this day she still feels like she could have done more for him. This feeling of guilt is very common in caregivers but she gave all she had and more in caring for him. In my opinion she was his hero at this point in his life as he had always been to her their entire life.

Tell us about your Walk team.

I will be participating in the Fresno-Clovis Walk to End Alzheimer’s on Saturday September 16th. This is my second year participating and I am very excited to see how our team has grown. Last year we had about 15 people in our office participating and this year there are 70. It has sparked some friendly competition.

We have come up with many creative ways to fundraise, but my favorite is allowing jeans to be worn in the office. We typically wear business professional attire in the office however for every $20 you raise you are allowed to wear jeans for a week. I want everyone to know that I am wearing jeans today.