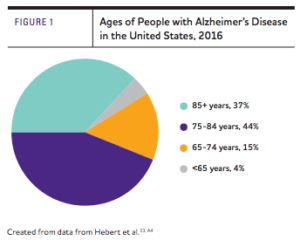 Millions of Americans have Alzheimer’s disease and other dementias. As the size and proportion of the U.S. population age 65 and older continue to increase, the number of Americans with Alzheimer’s disease and other dementias will grow. This number will escalate rapidly in coming years, as the baby boom generation has begun to reach age 65 and beyond, the age range of greatest risk of Alzheimer’s. In fact, the first members of the baby boom generation turned 70 in 2016.

With Alzheimer’s disease, it is not just those with the disease who suffer. It’s also their caregivers – a job that usually falls on family and friends.

Nearly one-fourth of Alzheimer’s and dementia caregivers are “sandwich generation” caregivers – caring for both someone with the disease and a child or grandchild. Caring for people with Alzheimer’s and other dementias is often very personal and very intrusive.

Over half of the caregivers of people with Alzheimer’s and other dementias provide help to the care recipient in getting in and out of bed; 40 percent help with getting dressed.

About one-third of Alzheimer’s caregivers provide help getting to and from the toilet, bathing, managing incontinence and feeding.

Caring for an individual with Alzheimer’s has a negative effect on employment, income and financial security.

Among Alzheimer’s and dementia caregivers who are employed full or part time, a third had to take a leave of absence, go from working full time to part time, or take a less demanding job.

More than one in six Alzheimer’s and dementia caregivers had to quit work entirely either to become a caregiver in the first place or because their caregiving duties became too demanding.

The PBS documentary tells compelling personal stories filmed around the country that represent previews of the future happening today. Tune in to see more tomorrow at 10/9 Central on PBS.