A Young Woman Takes the Field to Tackle Alzheimer’s

Vanessa Souza has been caring for people with Alzheimer’s and dementia for over ten years. This year she’s taking her dedication further by participating in the RivALZ San Francisco flag football event. This volunteer-driven event engages young professionals in friendly but fierce games around the country. As part of the competition, teams are organized around age-old rivalries “” East vs. West, Blondes vs. Brunettes, City vs. Suburbs “” that inspire fundraising, awareness and action in the fight against Alzheimer’s disease.

Vanessa says the San Francisco Blondes vs. Brunettes event and this cause mean the world to her, as an Alzheimer’s advocate and as a woman. Nearly two-thirds of the Americans living with Alzheimer’s – and more than 60 percent of Alzheimer’s and dementia caregivers – are women. Read Vanessa’s story below. 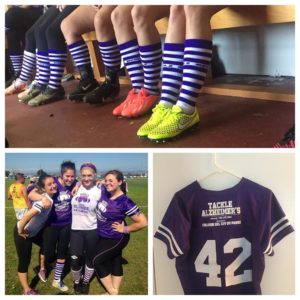 A few weeks ago, I was doing laundry, and realized I had enough Alzheimer’s Association t-shirts to do a whole load of just purple. My Facebook news feed is entirely articles on brain health, images of forget-me-nots, and photos of me in various shades of violet. My friends know I’m never available on Monday nights (RivAlz) or any Saturday in June (Alzheimer’s & Brain Awareness Month) or October (Walk to End Alzheimer’s).

I work, play, and volunteer to tackle Alzheimer’s – basically, I bleed purple. But I don’t have a close family member affected by the disease. So how did I end up here? I always tell people that aging is the family business – my mom was a nurse, and I used to go to work with her in various places, including a couple of nursing homes and assisted living facilities. In high school, I got my first job: answering phones and filing records for a hospice agency. I met my first social worker and knew that was my dream job. I wanted to help people, but I wasn’t so sure how.

I went off to college ready to change the world, and instead, the world of dementia changed me. I started volunteering in a special day program for people with Alzheimer’s, learned about the disease, how to manage challenging behaviors, and how to play Bingo in several languages. But even more than that, I learned patience, empathy, and a completely different appreciation for living in the moment. I realized that people with Alzheimer’s want the same things everyone else does “” to see their families, to do good work, to make dinner, to be loved””and that if we just take a moment to look at things from their perspective, we can build an understanding and a connection that goes beyond memory. 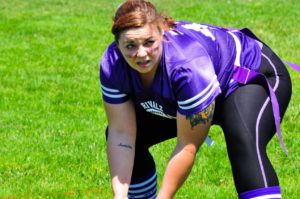 It has been fifteen years since I first walked in the door and met my first social worker. Since then, I’ve worked as a case manager, Alzheimer’s program director, and executive director. I’ve stood at tables handing out purple fliers and spoken to families and even people living with the disease on the 24/7 Helpline. Along the way, I found RivAlz Blondes vs Brunettes, and a whole community of men and women who were living with the impact of Alzheimer’s. In the beginning, I had no connection, just passion. Half a lifetime later, I tackle Alzheimer’s for my residents and clients, for my sisters on the football field who are playing for their moms, dads, grandparents, and themselves, and, yes, for myself, because I know that having a brain means I am at risk of developing Alzheimer’s disease. The end of Alzheimer’s starts with you and me. Join me and the rest of RivAlz BvBSF and tackle Alzheimer’s on August 20. You can support my campaign here.