NBC Bay Area Revelations Executive Producer Joe Inderhees and Producer/Writer Jim Gaughran took home the Emmy awards for best documentary and news writing last month. While most of the attention throughout the Emmy Awards was focused on who won, Joe Inderhees used his moment on stage to raise awareness about Alzheimer’s disease. His fellow producer, Jim Gaughran, has been caring for his mother who has Alzheimer’s, while working on the show. Watch their acceptance speech and read Jim’s story below.

Tell us more about Bay Area Revelations, and what the show and your Emmy win mean to you.

Bay Area Revelations is a documentary series that NBC Bay Area launched in 2015. Our goal is to reveal the untold stories of the people, places and moments which help shape the Bay Area and make it such a special place. Actor Peter Coyote narrates each episode. We focus on subjects where the Bay Area has had national if not global impact. Our topics have included the birth of Silicon Valley, the environmental movement, political protest, art and food. The last one was on Stanford and Cal. The next, which airs right before the Olympic Opening Ceremonies, is about how the Bay Area produces so many Olympic athletes.

Helping to write and produce Bay Area Revelations has been an extraordinary experience for me. I was born and raised here, I love the Bay Area and I’ve been here for a lot of the stories we’re telling. The main production crew is just three people. Joe Inderhees is executive producer and writer. Alex Bozevic is the cameraman and editor. I help out with interviews, research and writing. We produce a new episode every two or three months which, in the documentary world, is an incredibly tight production schedule. That said, the shows have looked amazingly good and the response from viewers has been overwhelmingly positive.

Emmy night was great fun. Joe and I won for writing Bay Area Revelations and then we all won for best documentary. We had put so much work into the series, it was gratifying to get the recognition. That wears off pretty fast, though. We had to get right back to work on the next episode. My statuettes are safely tucked away in the back of a closet, though my dad likes to bring them out when we have guests.

Your story has inspired others. What has your experience been working and being a caregiver at the same time? What would you say to others in a similar situation? 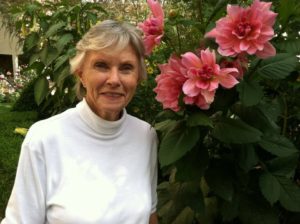 KNTV was very open-minded about my role as a writer-producer. I told them I might have to step away from the project, or abandon it entirely, without any warning. My mom is at stage 4 on the Alzheimer’s/dementia scale. That means lots of caregiving responsibilities and new ones showing up all the time. We are remarkably fortunate in that my father is in great health and the two of us can share what has become a 24-7 job. Because he is here, I can say that I need 6 hours to write and he will run interference for those hours. It’s still a very interrupt-driven day. Mom is very active and I may have to engage with her a dozen times in that six hour period AND make dinner for the family. Still, after 30 years of working in a newsroom, I can handle the interruptions. For every episode I have to spend two days in San Jose in a writing marathon with Joe. 48 hours with Mom is a lot of caregiving work for one person so lately we’ve had professional caregivers come in for a few hours each day to give Dad a break.
The one word I have for any family caregiver considering a second job is balance. Can you do the job and still be a good caregiver? Will you have enough down time, hiking time, reading time, friend time? Be brutally honest with yourself about how the job is going to change your caregiving schedule. This job works for me because NBC has been so flexible. Less flexibility would mean more time and more stress and I really don’t have room for either. It helps that I love to write and I believe in the project. The work is fulfilling and energizing. I am amazingly fortunate that THIS is the job that came along.

In his speech, Joe said he agreed to work on the show only if you joined his team. What was it like going back to TV work after being a caregiver for five years? 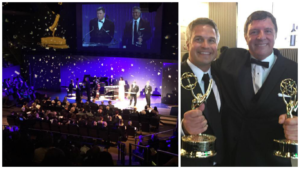 I left KNTV almost exactly 5 years ago. 5 years is a long time in TV news, more than enough time for people to lose your phone number. It was a real surprise when Joe called and asked if I wanted to help. I was 90% “no” for a few weeks. I talked to a few people, took a hard look at the time requirements and finally decided to give it a shot. At first, it was a hard slog. I was doing some writing about my caregiving experience on Facebook, but that was nothing compared to hour-long documentaries for television. After the first episode, I felt more confident and the writing came more naturally. By episode three, we were having fun. Now, I have a very workable system that lets me write for Bay Area Revelations, handle all my caregiving responsibilities AND play disc golf (aka Frisbee golf) in the early mornings. There’s no trick or secret method here. My dad has had to do more caregiving work. I have had to cut down on my all-important “me” time. But the rewards have made it worthwhile.