Research in the news: A test for Alzheimer’s that you can take online? 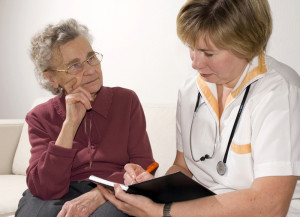 Many of you have seen headlines in the news that imply there is a new online test for Alzheimer’s disease. Created by researchers at Ohio State University, the test was made available online and the resulting news coverage led to so many people trying to access the test that it crashed OSU’s web site! Here’s a breakdown of the research about the Self-Administered Gerocognitive Examination (SAGE test), how it is administered and what the results actually mean.

Background
Tests already exist that allow doctors to get a baseline measurement of cognitive function in their patients, so they can follow them and track change over time. However, they are not generally administered at home or in a community setting, but in a medical setting. Unfortunately, people with Alzheimer’s often wait years after their symptoms first appear to seek evaluation and treatment.

The claim
In an article published in the January issue of The Journal of Neuropsychiatry and Clinical Neurosciences, researchers say the results of their study of the SAGE test show it is both reliable and can be administered in group settings, such as health fairs.

The methodology
The researchers visited 45 community events where more than 1,000 people age 50 or older took one of four versions of the SAGE test. Participants were provided their score and written information about SAGE, and were advised to show it to their physician for interpretation and potential further evaluation based on their health history. All were told that this test represented their baseline to be compared to future re-testing by their physician.

Beyond the headline
The researchers themselves say that the test does not diagnose memory and thinking problems, such as Alzheimer’s disease. If this tool is validated by further research, it may then become a tool – perhaps simpler to administer than some existing tools – that allows doctors to get a baseline measurement of cognitive function in their patients, so they can then track these abilities and assess change over time.

It’s also important to note that the results of this study are limited by the its scope -for example, we do not know if the people who were identified by the test as being impaired actually have verified cognitive impairment. Furthermore, the study population was based on whoever showed up at the community events and agreed to try the test. That is not a representative sample, and therefore it would be premature to generalize the results to a broader population.

The researchers also say the SAGE test can also be taken at home, and the results shared with physicians, but that was not tested in this study.

The bottom line
This possible new test is an interesting idea, but these are very preliminary results that need replication and confirmation to increase their credibility. Keep in mind that the results of the test are not an indication of whether or not someone has Alzheimer’s disease or other forms of dementia. Anyone with questions or concerns about problems with memory and thinking should consult their doctor.

Helpful information related to this story
Read about the study in The Journal of Neuropsychiatry and Clinical Neuroscience
See the SAGE test on OSU’s website
Know the 10 signs of Alzheimer’s disease
Why get checked for Alzheimer’s?
How is Alzheimer’s diagnosed?
More blogs by Elizabeth
The latest in research