Alzheimer’s research in the news: Copper 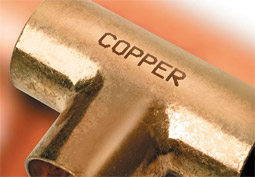 Metals are nearly everywhere in our environment, and they are present naturally in our body and brain. They play important roles in our diet and they are essential to a variety of processes in our body and brain. A newly-published study that has received a lot of news coverage in the past couple days suggest a possible link between exposure to copper and beta amyloid, a protein many scientists believe play a critical role in developing Alzheimer’s disease. Here’s the analysis of this Alzheimer’s Association-funded study:

Background
First, a reminder on beta amyloid – this protein fragment can build up in the space between nerve cells in the brain, creating what are called plaques. Though most people develop some plaques as they age, those with Alzheimer’s tend to develop far more. They also tend to develop them in a predictable pattern, beginning in areas important for memory before spreading to other regions. Most experts believe they somehow play a critical role in blocking communication among nerve cells and disrupting processes that cells need to survive.

Copper is a necessary part of our daily nutritional requirements, and is needed for a healthy body. Copper works with iron to help the body form red blood cells. It also helps keep the blood vessels, nerves, immune system and bones healthy. Copper is present throughout the brain, and plays an important role in central nervous system development.

The claim
Accumulation of copper in mouse brains in old age is associated with higher levels of beta amyloid in the brain.

The methodology
Scientists studied normal aging mice. They found that in these mice, copper is accumulating and causing some damage, and that copper has an impact on production and clearance of beta amyloid in the mouse brain.

Beyond the headline
It is important to keep in mind that this research was done in mice, not people. Previous research has found that various metals “” including copper, zinc and iron “” are present in beta-amyloid plaques. That doesn’t mean they cause the plaques; it means that the metals are present. Since there are metals in our brain, it makes sense to look at whether or not they are somehow involved in the disease process. In addition, it’s important to note that the study does not demonstrate in humans whether it is copper coming in from the environment or through the diet (or both, or neither) that may be related to a potential buildup of excess copper during normal aging.

The Bottom Line
There are a variety of ongoing scientific investigations into the role(s), if any, of metals in the brain in the Alzheimer’s disease process – in fact, we have funded several research projects in this area, including this one. But, as yet, there is no scientific consensus in the field about the role of metals in Alzheimer’s disease.

You do not need to change your lifestyle, diet or other habits based on this article. The study may provide useful information to the Alzheimer’s research field, but we don’t know that yet. There are Phase 2 clinical trials aimed at reducing levels of copper and other metals in the brains of people with Alzheimer’s disease and we look forward to seeing those results.

A Wall Street Journal article about metals and the brain includes a list of some of the normal functions of metals in the brain, and areas that researchers are investigating related to imbalances of these metals – A New Target in Fighting Brain Disease: Metals