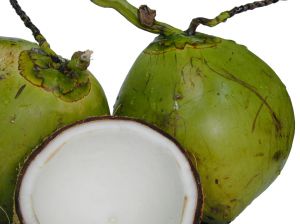 We’ve received quite a few questions recently about whether or not coconut oil can be used to treat Alzheimer’s disease. This is a topic that comes up often, so I thought it would be helpful to provide some background:

This theory has to do with substances called ketones. The damage caused by Alzheimer’s disrupts the brain’s ability to use its primary energy source, known as glucose. The brain naturally gets a portion of its energy from ketone bodies when glucose is less available (e.g., during fasting, strenuous exercise, and in newborns). Ketones may provide an alternative energy source to the brain’s cells to moderate the damage caused by Alzheimer’s disease. The body produces ketones when it metabolizes coconut oil and similar substances (fatty acids).

Unfortunately, there just isn’t any creditable science to support this idea. It is impossible for us to know how well coconut oil does or does not work in Alzheimer’s disease because there have not been rigorous, large-scale research studies done.

Because there haven’t been any large studies to test the effectiveness of coconut oil, we just can’t say whether it really helps people with Alzheimer’s disease. Maybe it does, maybe it doesn’t. I personally suspect that it has little effect on Alzheimer’s symptoms but, to be fair, I haven’t had any family members, friends or clients who’ve tried it.

My rule of thumb is that if the risks and costs are low, you might consider trying it. If the risks or costs are high, don’t chance it. Think about how you would feel if you gave your loved one something and they lost ground and independence as a result.

Some alternative therapies have substantial risk associated with them; be careful and don’t assume that something that is “natural” is safe. If you are considering trying coconut oil, please consult your doctor first to make sure it will do no harm to the person with dementia.