Can chocolate reduce risk of Alzheimer’s? 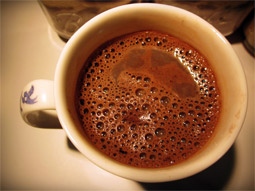 Like most people, I love chocolate and would be thrilled if it could be the next healthy brain food! And in fact a new study hitting the headlines today claims chocolate – cocoa specifically – might help improve cognitive functioning. As delicious as these results sound, I hate to tell you there are some serious flaws in the methodology.

This study looked at neurovascular coupling (NVC), which is a term for the close relationship between brain activity and brain cerebral blood flow. As different areas of the brain need more energy to complete their tasks, they also need greater blood flow. A lower blood flow response to a cognitive task is considered “impaired NVC.” If blood flow is impaired, it can compromise cognitive functioning, and perhaps even cause damage. This study was designed to see if NVC can be changed through dietary intervention – in this case antioxidant-rich cocoa.

Two cups of hot cocoa a day could help prevent the onset of dementia.

Sixty cognitively normal older adults with hypertension and/or diabetes drank two cups of hot cocoa a day for 30 days in an attempt to improve the blood flow in their brains during thinking tasks. The participants were given tests of memory and thinking skills, and had ultrasound tests to measure the amount of blood flow to the brain during the tests. Tests were given at the beginning of the study, after one day, and after 30 days. After a month, the researchers found that these people experienced (a) an improvement in blood flow to the working areas of the brain, and (b) improvements on a test of working memory. There was no improvement on either measure for those who started the study with normal brain blood flow. It is also worth noting that half of the study participants received hot cocoa that was rich in the antioxidant flavanol, while the other half received flavanol-poor hot cocoa. There were no differences between the two groups in the results.

This is a very small and very preliminary study that was not well designed as a test of an intervention or therapy. There was no control group in this study to compare to the group that drank the cocoa. Among other things, a well-designed intervention trial includes a comparison (or “control”) group that does not receive the intervention or receives a placebo. In this case, for example, the comparison group could have drunk water. In addition, factors that could possibly impact brain blood flow and/or cognition were not controlled, tracked or accounted for – as far as we can see in the article. There is no information on what else the 18 people with impaired cerebral blood flow did during the trial that might have improved their cerebral blood flow or cognitive performance (exercise, for example). A well-designed intervention trial anticipates, tracks and accounts for these possible confounding factors to help ensure the credibility of the findings.

While these results are potentially intriguing, and the connection to cocoa/chocolate is generating a lot of news interest, it is important to note that this study was poorly designed as a test of an intervention or therapy. No one should start drinking cocoa with the expectation that it will provide cognitive benefits based on this study.