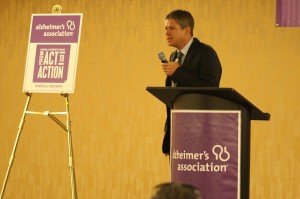 The National Alzheimer’s Project Act listening session is underway in San Francisco. More than 200 Alzheimer’s advocates are currently at the San Francisco Union Square Hilton telling Don Moulds, deputy assistant secretary for Planning and Evaluation for Health and Human Services what they think needs to be included in a national plan on Alzheimer’s disease. Some comments so far:

“If we don’t know what the problem is we can’t fix it. Who will fix it? We need to create communities in which Alzheimer’s is recognized and acknowledged.”

“We have a tremendous opportunity to move forward and if we don’t put resources towards this disease we will miss that opportunity. There is an army of passionate excited young people who want to devote their careers to Alzheimer’s; if they dont’ get the support and resources they need, we’re going to lose a lot of time and a lot of young scientists”

“The funding for HIV/AIDS is much higher than that for Alzheimer’s I would challenge the government to fund Alzheimer’s as well as HIV. I feel that large incremental increase can help us go a long way so we can find a cure for this disease. It won’t be soon enought for me but it will protect my daughter.”

“We started as control subjects in a UCSF study; little did we expect one of us would be diagnosed. It’s a surprise after working hard your whole life to have this happen. It’s hard to do this.”

“I find it very upsetting that so few people know what Alzheimer’s truly is and what it truly does to someone. I can’t tell you how many times I’ve told people about my grandmother’s Alzheimer’s and they think it’s just memory problems. I think it would be important to have something that can bring awareness to the whole county and why it needs to be a national priority.”

“There needs to be education of first responders — police, fire fighters, emergency responders and how to recognize when someone has the disease.”

“I looked after my mom for 8 years while she was battling Alzheimer’s and I’d like to second what the previous speakers have said about the extreme ignorance of people about Alzheimer’s, even in the health care community. My in all the facilities my mother was in, I found that most nursing staff, even doctors and CNA’s lack an understanding of how to care for Alzheimer’s patients.”

“Incarceration is not the answer for demented people. I had an officer tell me they would rather deal with a criminal than a person with dementia.”